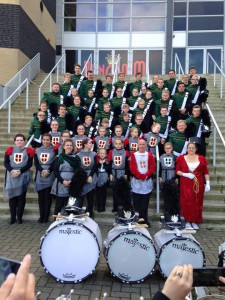 Revolution Show Corps, the Queensbury Scout Band, are on their way back from a fabulous weekend competing at the Drum Corps Europe (DCE) competition in Kerkrade, the Netherlands.

They had a fantastic time qualifying for the finals with points to spare in the morning and ending the day ranked as 9th best in Europe! A superb result, particularly as this was their first time competing at this level and they were up against corps with much older members.

You can watch a snippet of their qualifying performance on the Drum Corps Europe website.